skip to main | skip to sidebar

Little paper houses - a long intro and then a tutorial

Sometimes my big fat mouth gets me into trouble. Like when Liv's teacher had a sign-up sheet for parents to come in and do crafts or other fun activities with the kids as a reward for good behavior. "Oooh, this sounds FUN!" That wasn't the bad part. The bad part was when I said "Just let me know what weeks aren't covered by other parents and I'll take care of those."

And then I find out that only ONE PARENT signed up to do ONE WEEK. That means the rest of the weeks are mine, all mine...

And did I tell you that I got this news on a Wednesday, and the first reward activity time was scheduled for that Friday? As in, two days to come up with an activity and prep it.

After the "What heck am I going to do" panic left, I realized that this could be a good opportunity for me. Nothing stretches the creatives muscles better than a little bit of repetitive exercise.

The school that my daughter goes to is one that focuses on the arts, so I wanted the activity to be fairly open ended for the children to express their individuality. And not having met most of these children, I wasn't entirely sure what they'd be capable of doing.

So the first project had to be cheap, easy to prep, open-ended, and fairly simple. No biggy. Heh. Heh. Heh.

I was two steps away from running out to the craft store to buy some cardboards shapes for the kids to glues feathers on to when inspiration struck.

When I was a kid I had an origami book. Most of the projects were too complex for me, but I did remember one that was easy to do. A few simple folds could turn a rectangle into a little house. A square of paper folded in half could make a roof. The cool thing about this little house is that it shows the inside of the house more than the outside. What if I folded up a bunch of little houses and let the kids decorate them? Would that work?

In a word, YES. They LOVED it!! Waaay more than I expected they would. They really got into it, with pictures of beds and tables and couches and TVs. I had kids running up to me and showing me what they drew inside their houses. They were all so proud of their creations! The teacher got out a bucket full of plastic bears that they use for counting, and let the kids put a trio of little bears in each house. Even MORE fun!!

Needless to say, I felt a little bit like a rockstar when I left.

Look at the one that Liv made: 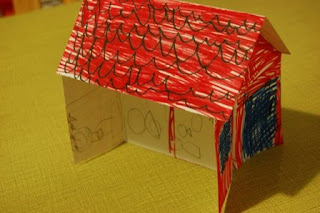 It's a kitty house, of course. With kitty bunk beds... 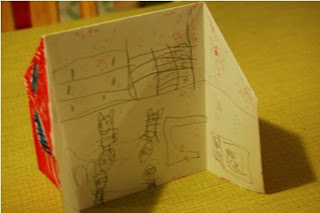 ...a parent's room upstairs, and a playroom downstairs... 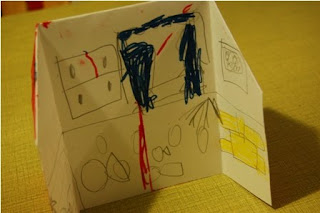 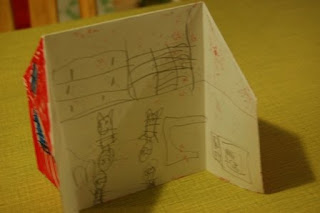 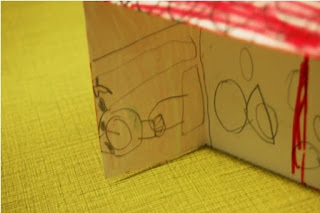 ...and of course a kitty bathroom.
Liv's teacher had me show her how to make one so she could show the other 1st grade teachers. Which got me to thinking - maybe other people would like to know how to make some little paper houses. Perhaps a tutorial is in order? 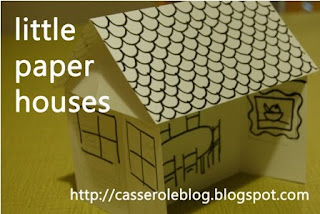 This really is a simple folding project. The house itself is made from an 8 1/2" x 11" piece of paper. The roof is just a 6" x 6" piece of paper folded in half. I used cheap-o cardstock from Michael's - the stuff that comes 50 sheets for $2.99 and is so thin that it can hardly be considered cardstock. Not good for making cards, but perfect for this project. Copy paper is too thin, but really thick cardstock would be too hard to fold. 1. Fold your cardstock in half (the short way). 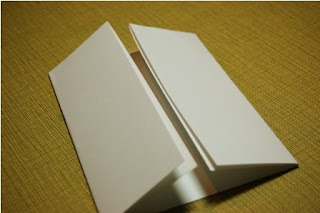 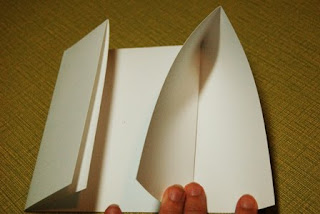 3. Open up one of the folded sides. 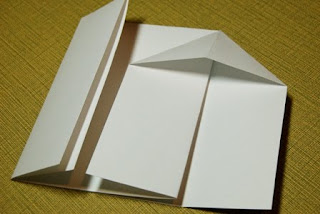 4. And the top down, making a triangle. 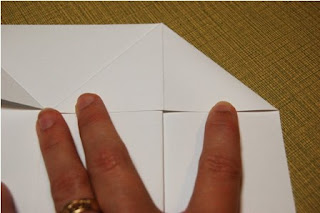 Here's another view of the same step. See how the top crease of the folded rectangle is lined up perfectly with the fold at the side of the rectangle? 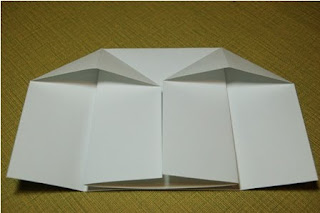 5. Do the same with the other side. 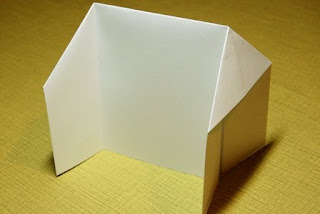 6. Fold the side flaps back to the other side to create a crease, and then stand up your house. 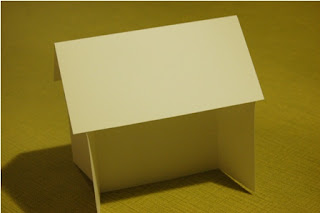 7. Fold a 6" x 6" piece of cardstock in half and lay it across the top. Easiest roofing job ever! 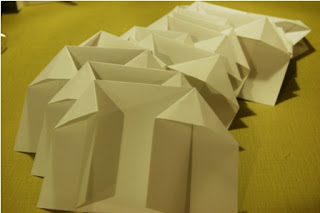 Here's my stack of 20 that I made for the class. It took about 30 minutes to fold all 20, plus cut and fold the roof pieces.
This was the example I put together to show the kids. Nothin' but a Sharpie and some quick line drawings. I still contend that I don't draw well, but I can say that a Sharpie really is the best way to disguise it. Something about those thick, crisp, black lines... 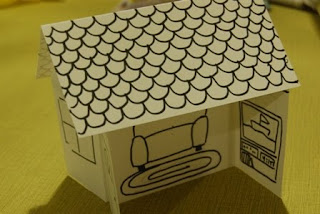 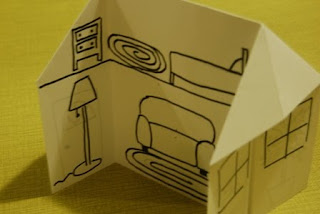 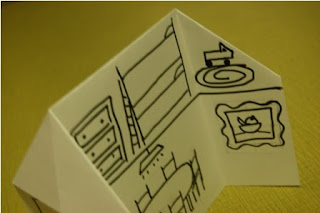 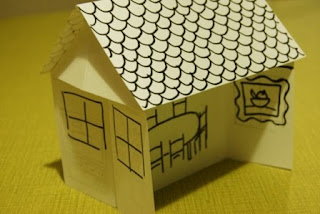 If you make your own little paper houses, I'd love to see them!
Toodles,

YOU ARE A CREATIVE GENIUS!!!

But then, I already knew that :)

LOVE those houses. We will for sure be making some. Ooooh, maybe some haunted houses for Halloween!

Love the houses and nice tutorial besides.

I love it! I always remember how to do the origami house and often try to impress my kids with their mom's genius abiblities :D

This is really neat! I admit that I started laughing out loud when I read your first paragraph about how only 1 other parent volunteered and all of the other weeks are all yours. You will do a great job with this. I think you should take those pictures you made with the rocks that let kids draw whatever they see in the rocks. You need to start a creative notebook for this. Whenever you get an idea, write it down. You are gonna need many, many weeks of ideas.

You will love this gig. Your houses are spectacular too. You can be sure all of those children will be making more of them at home too!
Teaching little ones is great for coming up with ideas when you have no budget.
If you ever get stuck for ideas, let me know. As an art teacher that never had a budget, I have loads of projects I can pass on to you :)

So cute! My son is still a little young for this, but I'm totally bookmarking it!

Thanks so much for linking up my shirt! I really appreciate the support :)

thank you soooo much for sharing this tutorial, is awesome and perfect to make anywhere :)

I had the same idea to make haunted houses for Halloween! I think it will be great fun for the kids! And I just wanted to drop by and say thanks for linking up my bat pillow tutorial to Craft Gossip- my blog has gone crazy! So THANK YOU!! :) Amy

I love it ! my boy loves tiny things and this would be perfect for him to put his tiny things in! thanks for stoppping by my blog nice to " meet you"

Girl if you'd said you were the only one signed up I'd have helped! Thankfully there's still plenty of time.

Will have to wag my finger at Rachel for that. *chuckles*

Madd still loves his little house! Thank you for all you do with them. He's always excited when it's PAT time.

Too much fun! I am so glad I saw this on a friday; this is going to be something new and fun to do with my son this weekend. He is 9 and not usually too interested in being crafty, but I think he will love this. Thanks!

Hi from Lush Stuff blog...I laughed when I read your intro...sounds just like something that could happen to me. Don't worry ,I think the kids will love your ideas.The house was a great start for sure.I will definitely try them with my kids.Andrea

You can call me Betty, or Bethany, or Beth ...Just don't call me late for dinner. said...

My niece is having a paper doll birthday party... These will be PERFECT.

Hi Anne, these paper houses are the sweetest things ever! I WISH I'd seen these about a year ago when I was teaching English to kids in Spain. The biggest challenge of that was keeping their attention for more than 2 seconds, these would defnately have really helped! Also, thanks so much for adding my contrast yoke jumper to that crafty blog! I love the idea that my creation may inspire further refashions.

Hey there! You won the silly monster pattern over at sewcraftcreate.com. Contact me at madebyheidi@gmail.com to claim your prize!

Such a great project... It's been raining forever here and I need something to entertain the kids. Thanks!

cute! Thanks a million for linking the cardigan tutorial up! You don't realize how many followers and how much publicity I got from that!

Thank you soo much for linking my tutorials up! It's helping my blog out a ton! 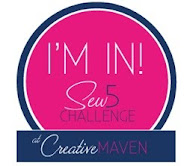 My homemade version of a leg wedge for sleeping 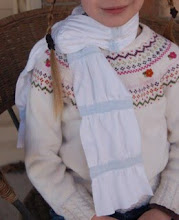 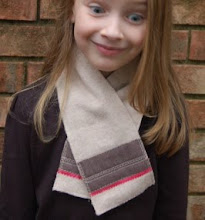 Wool scarflette wraps around the neck with an easy velcro closure 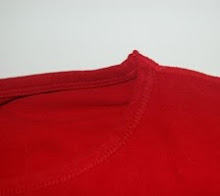